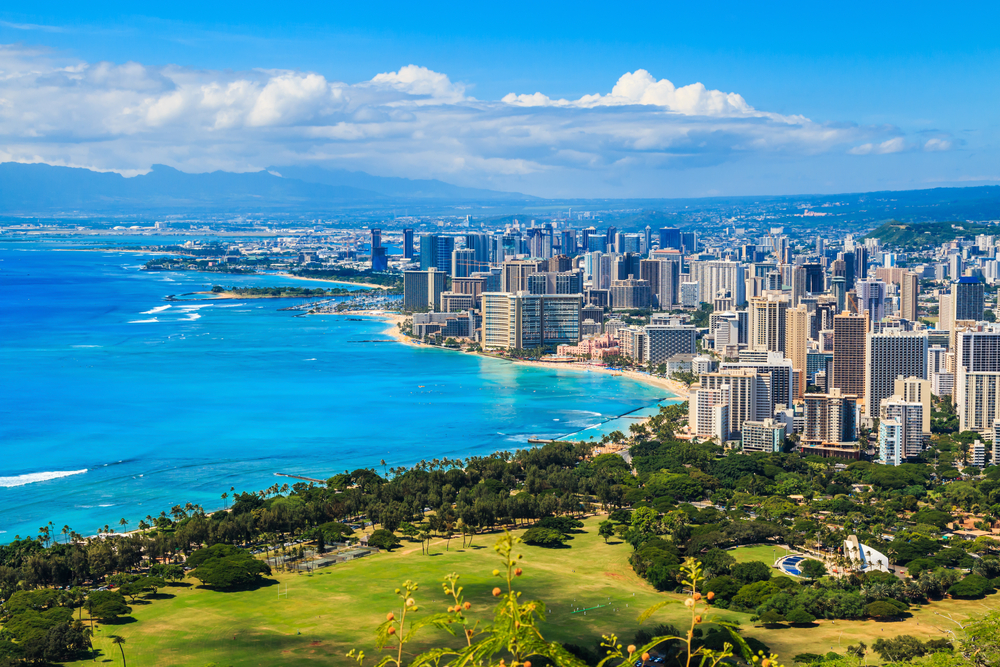 As isolated geographically as it is, Hawaii’s location near the middle of the Pacific Ocean also makes it reasonably accessible by commercial air travel to both North America and Asia. In addition, its location is strategic in providing U.S. military stability to the Pacific region, as well as in playing a part in the nation’s missile defense system. The combination of mid-Pacific location and multicultural environment makes the state attractive as a commercial bridge between East and West.

Because of Hawaii’s multi-cultural resident population and popularity as a global tourist destination, Asian companies find Hawaii a useful testing ground for products, business models, and gradual cultural acclimation for staff before entering major U.S. markets and business environments. U.S. companies find expertise in Hawaii for honing Asian business plans, and as a Pacific headquarters that enables staff to remain in the U.S., but be only hours away by plane from major Asian markets. This is facilitated by the local time zone which permits Honolulu offices to consult with U.S. mainland offices and Asian offices over the course of the same business day.

Hawaii tax laws can help lower the cost of doing business. The State of Hawaii levies no personal property tax, no stock transfer tax, and no unincorporated business tax. It is also one of the few states that does not impose a tax on inventories, furniture, equipment, machinery, etc. In addition, except for a tax based on net income, no state tax is levied on goods manufactured for sale out of state. And goods and services exported to overseas locations are exempt from the General Excise Tax (GET).

While cost of doing business in Honolulu does come at a premium, it is much less than other major cities in the Asia-Pacific region such as Hong Kong, Tokyo, Seoul, San Francisco and Los Angeles.

In-migration of workers with college degrees over the last several decades has contributed to putting Hawaii 13th among the state in years of school completed, according to the Hawaii Department of Business, Economic Development & Tourism (DBEDT). There are 11 university campuses in the region offering Bachelors and higher degrees, supplemented by a seven-campus community college system serving all counties. The State’s flagship college campus is the University of Hawaii (UH) at Manoa, which offers Ph.D. degrees in numerous subjects, and maintains schools of law and medicine.

Hawaii has a strong (business) accelerator community which has put Hawaii on the map as a serious place to build a company. Accelerators are said to be the cornerstones of entrepreneurial ecosystems, mobilizing global networks of mentors, capital and other resources. In August 2016, three Hawaii accelerators won national awards from the U.S. Small Business Administration for their work supporting small-business job creation and growth – Kona-based GVS Transmedia Accelerator (film and creative media); Maui Food Industry X-celerator (value-added agricultural products); University of Hawaii’s XLR8UH program on Oahu.

Health state and a quality of life

According to the United Health Foundation’s 2015 Annual Report: America’s Health Rankings, Hawaii residents enjoy the longest average life expectancy in the nation. The state ranks No.1 – as best of 50 states, in preventable hospitalizations and those due to accidents; 2nd best in prevention of the number of deaths by cancer, and 5th best in the prevention of deaths from heart disease; and ranks 28th out of 50 states in per capita number of deaths due to strokes. Hawaii ranks 9th best of 50 states in the number of physicians, and 6th best in number of dentists per 100,000 people, according to the DBEDT.

According to CNBC’s Top States for Business 2016, Hawaii ranks first in quality of life. Hawaii’s near-ideal year-round climate supports a variety of outdoor activities, particularly golf, tennis, and a wide range of ocean sports. There are 85 golf courses Statewide. Hawaii has a well-developed public parks system including seven national parks, 65 parks and historic sites, 712 county parks, and a number of botanical gardens. There are 282 public tennis courts, 2600 small boat moorages, and over 1,600 recognized surfing sites.

Hawaii’s people possess the intangible “aloha” spirit. Hardworking and productive, they are also friendly and helpful. The blending of cultures in Hawaii is complemented by the presence of an international spectrum of visitors who add to the State’s rich diversity, hospitality and promise.

Act 186, Session Laws of Hawaii 1986, further recognized the “Aloha Spirit” as a life force which is expressly stated in HRS Section 5-7.5 and reads in part: “. . .It was the working philosophy of native Hawaiians and was presented as a gift to the people of Hawaii. “Aloha” is more than a word of greeting or farewell or a salutation. “Aloha” means mutual regard and affection and extends warmth in caring with no obligation in return. “Aloha” is the essence of relationships in which each person is important to every other person for collective existence. . . .”